So the other day, Nick D’arcy, convicted assaulter, and Kenrick Monk, he of the false police reports, posed for a photo in a gun store in the US looking like tools trying to be cool in the presence of lethal weapons. 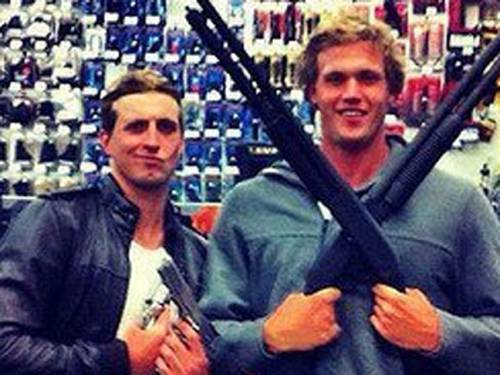 Since then, there has been a fair flurry of media discussion about the photo and what it means, and yesterday, it was announced that the athletes would be removed from the athletes’ village at the Olympics immediately upon completing their events – perhaps the greatest punishment one could suffer short of expulsion from the team.

Today, they have faced the media, ‘deeply sorry’, suggesting that they have learned a lesson and will ‘refrain from using social media until after the Olympics’. If nothing else, it’s good news for the swimming team just how fast D’Arcy decamped from the press conference this afternoon.

But here’s the thing, despite the knee-jerk reaction by the AOC, the spluttering headlines across both tabloid and broadsheet media, and the po-faced mea culpas of the culprits, it’s hard to find anyone who is actually outraged by the whole thing. Even tonight on 730, the best they could manage was ‘people were outraged, not least the AOC’. Nup, no actual people.

The behaviour of the AOC and the swimmers are, to a fair degree, understandable. Faced with a ‘backlash’ to the photo (whose only real crime is the lamewad gangsta-posing of the photo), the AOC acted in what it thought was a pre-emptive manner, while the swimmers showed the appropriate contrition in order to make sure they still get to go to London.

So the problem? The media, also deciding pre-emptively that there would be outrage, wheeling out a series of clichéd headlines, riding the back of an admittedly attention-grabbing photo. It seemed not to matter that the journalists responsible couldn’t find anyone of merit to speak out against the pair. Rather, they decided that the outrage would come eventually, and the articles might even help that along.

It barely requires mentioning why this event raised precisely zero eyebrows outside the AOC. Guns are everywhere. Like it or not, we find them sexy, illicit and cool. In America, they are entirely ubiquitous, and the swimmers posing with these legal, unloaded weapons,while perhaps distasteful, is something that I would wager the vast majority of Australians would do. Even I – avowed advocate of banning guns for citizens globally – would probably have done it. I certainly have been clay shooting on a friend’s farm, and posed for several photos while I sent those slabs of ceramic to the next world. It was ace fun.

But there are bigger questions that are being suppressed in light of this. Nick D’arcy, you’ll recall, beat the living shit out of ‘team mate’ Simon Cowell, “recklessly inflicting grievous bodily harm, the victim suffered fractures to his jaw, eye socket, hard palate, cheek bone and nose.” Years later, Cowell had still not recovered from the injuries.

Kenrick Monk went out skateboarding, fell off, fracturing his elbow in two places. Rather than own up to behaving in a manner that his employers would discipline him for, he instead blamed a hit-and-run.

So it’s clear that Monk is an idiot, and D’arcy is a violent thug. The fact that D’arcy is on the team is, frankly, ludicrous. Not because he has no right to, but any employer who re-employs a violent offender is asking for trouble.

Perhaps, just perhaps, the mistake is made by editors, rather than athletes.

Error: Twitter did not respond. Please wait a few minutes and refresh this page.